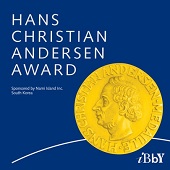 International Board on Books for Young People (IBBY) today announced the winners of the 2016 Hans Christian Andersen Award considered to be the children’s Nobel. IBBY is very grateful to Nami Island Inc. in the Republic of Korea for their sponsorship of this prestigious award.

Berner’s work is at all times recognizably hers, while simultaneously being intensely responsive to the demands of the text, or in the case of the Wimmel Books, to the specific world of a very specific town. She is willing to take risks—The Princess Will Arrive at Four is a brilliant example of this as is the fairytale comic book, Definitely Not for the Little Ones, and When Death Came for a Visit, written by Jürg Schubiger. Her books can be hilariously funny, and equally deeply moving. And she doesn’t fear showing life’s dark moments.

The Wimmel Books are an exemplar of how to construct an elaborate and complex world filled with small important narratives that can engage the viewer for hours through purely visual story telling power. Berner never talks down to her audience and yet her books are unmistakably for children. Children all over the world deserve to be exposed to her brilliant, humane, rich, emotionally true and deeply engaging books.

The unanimous choice of the jury, Cao writes beautifully about the complex lives of children facing great challenges. He is a deeply committed writer, whose own difficult childhood has been deeply influential on his writing in which there are no easy answers. In Bronze and Sunflower, a novel set during the time of the Cultural Revolution in a rural Chinese village close to a re-education center for people sent from the city, a village boy who does not speak and a little city girl who ends up coming to live with his family can be said to “save” each other. These children are entirely convincing and we care deeply about their fate. In Cao’s Dingding Dangdang series we are captivated and moved by two brothers with Down syndrome who separately flee their village and then search for each other through a world that is alternately loving and rejecting. These books take risks and have a great deal at stake.

Cao Wenxuan’s books don’t lie about the human condition; they acknowledge that life can often be tragic and that children can suffer. At the same time, they can love and be redeemed by their human qualities and the kindness they sometimes find when they are most in need. Cao’s writing about the natural world is lyrical and beautiful. And Cao is a great example of how writing wonderful prose and telling stories about brave children facing tremendous difficulties and challenges can attract a very wide and committed child readership as well as helping to shape a literary tradition in China that honors the realities of children’s worlds. Recently Cao Wenxuan’s books have been making their way into the world and have found enthusiastic readers in England, France, Germany, Italy, and Korea. The rest of the world’s children are waiting to discover him, too.

The jury would like to emphasize the high quality of many of the submissions, especially those on the shortlist. Many of these authors and illustrators have not been published widely internationally, primarily because they live in countries whose languages are not widely read and hence in the current climate in publishing have unjustly found it more difficult to be translated.

This does not mean that they are not in the very front ranks of creators working for children.

The first criteria for the selection of the shortlist and the winners were the artistic excellence of the writing and of the art. The jurors were also interested in seeing how the creators had evolved in the course of their careers and whether they had been willing to take creative risks. It was also deemed very important that the books produced by the authors and illustrators be of significance—that important things were at stake in their work. And finally, did their books speak to children? Were these creators people whose books could be read by children all over the world, be accessible and meaningful to them, and enrich their lives and understanding?

심사위원단 The jurors in alphabetical order by country:

· Andrej Ilc Slovenia a publisher of adult and children’s books

For more information, full biographies of the winners and information about IBBY, go to http://www.ibby.org